In the recent years, pressure has grown for cammers and other sex workers to accept virtual currencies such as Bitcoin and Ethereum in exchange for their services. I understand the temptation — untraceable money? Hallelujah!

However, I believe sex workers should steer clear of all altcoin. (I’m using the terms “cryptocurrency,” “cybercurrency” and “altcoin” interchangeably, defined as digital assets used as money.)

Now, to be clear, I have no specialized knowledge of virtual money systems or cryptology, so this is just my opinion. Let me make my layperson’s case why I think cybercurrencies are too risky, especially for cammers and other sex workers. 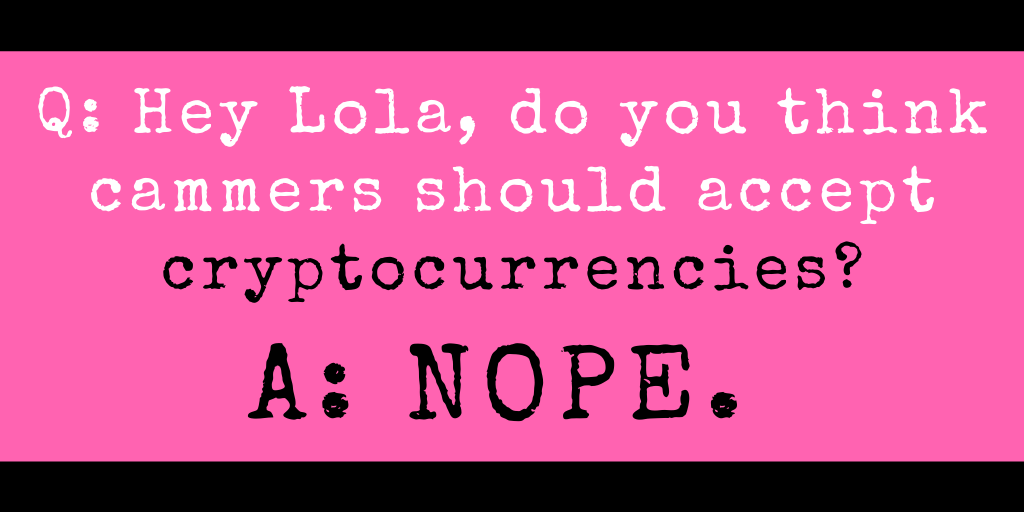 Valuations in the cybercurrency space fluctuate wildly. I’m sure you wouldn’t dream of staking your tips to ruble futures, but with cybercurrencies, that’s in effect what you’re doing. Any currency that regularly loses 50-80% of its value in a few months, as Bitcoin does every few years, and or from $319 to ten cents in one day as Ethereum did back in 2017, is Monopoly money as far as I’m concerned. Sex workers work too damned hard to have our money wiped out by capricious market forces.

Now, perhaps the wild swings in valuation are precisely what attract you to altcoin in the first place. After all, if a market doesn’t move much, how’re you supposed to get ahead? Maybe you want to be where there action is. Just be aware that there are different kinds of risk. Not just volatility, but lack of institutional or legal protection, as well.

How would you feel if you opened your virtual bank account and found it cleaned out? Who would you call to investigate the theft of your hard-earned cyberdollars? There’s a whole lot of talk about the security protections of block chain technology, sure. Also, now there are quantum computers that have the potential to squash blockchains like bugs. When some cyber Bond villain gets his hands on a quantum computer and starts wrecking havoc on digital currencies — which sooner or later, one will — who do you think he’ll target first? I’m guessing online sex workers will be pretty high on his list.

Cybercurrencies are barely used as money in the real world, and that’s a real problem. Enthusiasts promote altcoin as a currency alternative — that’s one of the main ways it’s gained legitimacy with the general public. That claim, however, is based on the prospect that ordinary people — shop owners, department stores, folks like you and me — use cybercurrencies for everyday financial transactions. That would be great if it was actually happening.

But it is not.

Cybercurrencies have not penetrated as a mainstream payment method, even as speculation has exploded. The vast majority of people who own altcoin aren’t using it to buy and sell things. They’re hoarding it as an investment.

This phenomenon is known as “disinflation,” meaning “a situation when currency is not spent due to fear or greed.” If a currency isn’t being used as actual money, there is no underlying basis for its value. Just like the Dutch tulip mania of the 1600s, an altcoin’s only true value becomes whatever you can talk the next sucker into paying for it.

Altcoin scratches a libertarian itch, I get it. Living free of restrictions is appealing. My advice, however, is stay away.

If you must accept cybercurrencies for the health of your business, here is advice to limit your risk:

— Only accept name brands with a track record. If you haven’t heard of it, that’s a bad sign. It’s a huge red flag whoever is trying to hype you on it, too. Be skeptical, and do your research.

— If you use cybercurrencies as a means to get paid, then do not hold your altcoin earnings more than 24 hours before cashing out.

— If you chose to invest in cybercurrencies because you think they’re a solid investment, more power to you. However, hold only as much as you are willing to lose. As in one day you wake up to find your account closed, the website a 404 error — gone. There is zero guarantee that any given altcoin will be in existence a year from now.

So, maybe you’re still not convinced, since I’m no expert. Let me quote someone who is.

Eric Wall has devoted his life to studying blockchains and cryptocurrencies, and he recently tweeted: “After many years of cryptocurrency research, my conclusion is that even if you become a top 1% researcher in this space, there’s still so much you don’t know, don’t understand, or just haven’t learned the true nuances of, and you’re still completely wrong about almost everything.”

After many years of cryptocurrency research, my conclusion is that even if you become a top 1% researcher in this space, there's still so much you don't know, don't understand or just haven't learned the true nuances of, and you're still completely wrong about almost everything.

Any field of knowledge where even the most clued-in don’t have a clue? Respectfully, that makes civilians—like you and me—look a lot like suckers. I’ll say it again, I’ll say it every time: steer clear.

Until next time, be sweet to yourself.

Lola Davina is a longtime veteran of the sex industry and author of Thriving in Sex Work: Sex Work and Money, her followup to the formative Thriving in Sex Work: Heartfelt Advice for Staying Sane in the Sex Industry. Contact Davina at Lola.Davina@ynotcam.com and visit her on Twitter at @Lola_Davina.

Lola Davina: Mindful Spending (During the Holidays and Beyond)

Lola Davina: Underearning (and How to Get *Over* It)
COMMENTS 0