I sat down with the spectacular Jiz Lee to discuss piracy on the web. They had a lot to say on the subject. In today’s part one of two, we’ll talk about what piracy is and the emotional toll it can have on us. Next week, Lee will share some of their best advice for combating illegal file sharing… and more! 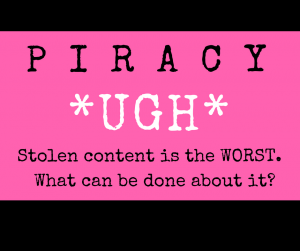 YNOT Cam: How would you define piracy?

Jiz Lee: In a nutshell, “piracy” is the unauthorized copying, distribution or use of someone else’s work, and despite the fact that it’s rampant all over the Internet, it is totally illegal.

For photos or videos, the owner of the content is generally the person who held the camera — or whoever paid them under a “work for hire” arrangement to take the images. When performers work for a producer, they sign a model release that relinquishes the rights of their image to a studio. Ownership grants exclusive rights such as the ability to reproduce images, to edit them, and to distribute them for sale.

Of course, these days, many performers produce their own content. We own the rights to our photos and videos, even if it’s snapping a nude with our smartphone. What we do with our content is up to us, whether we sell them or post freebies or teasers.

Do you have a personal story of how it felt to have adult content stolen?

When I was first starting out, I came across a video I was in that had been viewed over 50,000 times. (This was around 2006… Tube sites are far more popular these days, with views in the millions.) If even a fraction of these views were paid for, production companies would be able to increase performer pay and improve the quality and frequency of their work.

To me, piracy feels non-consensual. In the years I’ve worked in the adult film industry, the only time I’ve felt exploited was when I find my work pirated. And to add insult to injury, pirated content is often stripped of its titles, tags and context, instead describing performers with words that are racist, transphobic and otherwise inappropriate.

That’s an excellent point. When content is pirated, we lose not only the income, but the way our work is marketed as well.

I’m always curious about the emotional cost of sex work, the unpaid work we do to manage our feelings in the face of complex situations. How does it feel when someone steals content?

Creators can have intense emotion reactions to being pirated. We put hard work into our content and care about our image and our brand reputation. Seeing our content pirated can bring unpleasant feelings of rage, betrayal, frustration and discouragement, whether it’s being leaked for free, resold or used to create fake social media accounts.

Why put all the effort if people don’t respect our work? Piracy is rampant on the internet, and sex work is already devalued.

Jiz Lee is a force! Now, here’s where I’m going to jump in with some self-care advice.

If you find your content has been stolen, it can feel like a kick in the gut. Set aside some time to really feel all the feels. I recommend moving your body strenuously—jump up and down, punch a pillow, put on Nine Inch Nails and dance your rage dance.

You, however, are neither. You are powerful and magnificent! Once you’ve had a chance to work through your initial reaction, it’s time to fight back.

Next week, Lee will return with some dynamite concrete advice on how to combat online piracy. To learn a bit more in the meantime, check out YNOT Cam’s interview with anti-piracy expert Nate Glass, owner of Takedown Piracy.

Editor’s Note: We love Jiz Lee, that is all.

My workout game seriously leveled up after I realized there are people who like to buy sweaty underwear. ??‍♂️?? pic.twitter.com/Tln895T4H7

Lola Davina is a longtime veteran of the sex industry and author of Thriving in Sex Work: Heartfelt Advice for Staying Sane in the Sex Industry, a self-help book for sex workers now available at Amazon, Barnes & Noble, iTunes and wherever else ebooks are sold. Contact her at Lola.Davina@ynotcam.com and visit her on Twitter at @Lola_Davina, on Facebook and on Tumblr.

Getting Out of a Rut
COMMENTS 1