As such, just because something is not our personal preference doesn’t mean it’s wrong. And even if you or I don’t like it — whatever “it” may be — as long as consent is present, if someone is into it, then it’s fair game. Often though, making good on this standpoint is easier said than done.

For instance, just about everyone we know is all about free speech. Heck, part of the reason we all have jobs is because of free speech wherein it’s our speech that’s being protected. (Trust me, though the sex biz is awesome, not everyone thinks the same ways about it.)

Free speech protects our jobs, but I will be the first to admit that there’s all sorts of speech out there that I could do without. Why then don’t I get to do away with all the stuff I don’t like?!

Because that’s not the way it works.

The same goes for sexual speech and content creation. Pending issues of consent, sexual expression is kinda the same thing — if I want mine, then I have to allow others’ theirs.

Recently, YNOT Cam received a note from Goddess Siham, fka OFP — Official Fat Pussy. She alleged that some of her content was removed due to a paradox along these same lines.

Here is the statement she sent (lightly edited for length and clarity):

Hey! It’s @Goddess_Siham. You may know me formerly as “Official Fat Pussy.” I’ve recently rebranded myself and now go by “Goddess Siham.”

In [my model profile interview with YNOT Cam], I touched base in regards to my race play content. Since then, I was harassed a ton by fellow sex workers to the point where they ganged up on me. I had so many reporting me to Clips4Sale that the CEO took my page down even though I was in compliance with the rules. The CEO told me my content was fine as long as I didn’t use racial slurs in my title or descriptions, which I made sure I didn’t do because I knew this was the only outlet I had left for that content.

But the fellow spiteful sex workers were on a mission — and succeeded. The CEO even told me it was wrong of them but was left with no choice due to all the complaints. Look on the site now under “Interracial Domination/Humiliation.” Those videos are still allowed. He just singled me out.

Since then, I started my own site — OfficialFatPussy.Com — where I sell that content now. I also film blasphemy videos where people of certain religions like you humiliating them and their religion. I already knew my blasphemy videos were going to be next. Sure enough, a group got together and complained to ManyVids. Just like that, blasphemy videos are no longer allowed [on the platform]. They at least had the decency not to single me out like Clips4Sale did.

I’ve also recently had my Twitter @Super_Soaker69 shut down. I had over 130k followers. In an odd way, I’m kind of glad it’s gone. I’m focusing on the new me, Goddess Siham.

This is just the beginning for Goddess Siham and my blasphemy videos. Love me or hate me, I think I’m a great example of how you’re going to make it in this business. Many by now would back down because they can’t handle the criticism. It’s my motivation, and I want to end this by thanking every single one who has tried to destroy who I am as a performer. You may have got an award of mine taken away, prize money taken, my content banned and my Twitter suspended, but guess what?

I’m still here. I’m not going anywhere. This is just the beginning.

Hijab and veil in my Ramadan video or no? pic.twitter.com/f72MGPFf6E 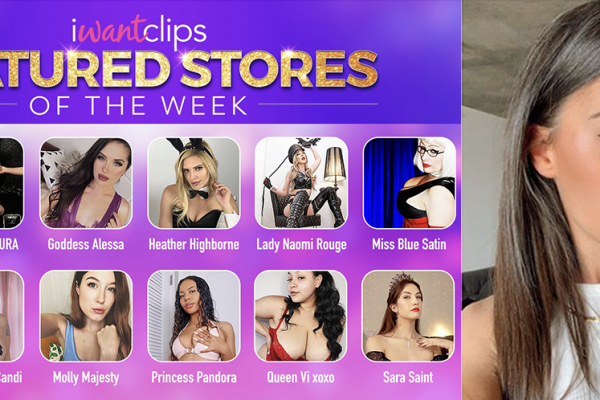